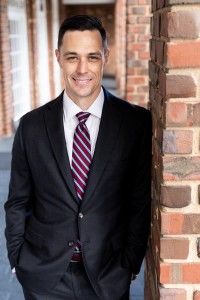 After the first time I watched Law and Order with my grandmother around the age of ten, whenever I was asked what I wanted to be when I grew up, my answer was “a lawyer.” From that point forward, the purpose of my education was to achieve that goal. And as I entered my senior year of high school, I was on track to achieve it.

But like all Americans, things quickly changed for me on September 11, 2001. I knew that terrible day that our country would go to war and it would be my duty to serve. After researching various military career paths, I decided to become a Marine Corps officer so that I might one day have the privilege of leading Marines on the battlefield. Becoming a lawyer would have to be put on hold.

In 2006, I graduated from Boston University as a Second Lieutenant in the United States Marine Corps. After surviving the rigors of training, I deployed to Iraq for a year with a small team of Marines embedded within an Iraqi army unit. For an entire year, we ate, slept, trained, and conducted operations with Iraqi soldiers striving to make their country a better place. One day on patrol, a man approached me who had just cast a vote in an election for the first time in his life. With tears in his eyes, he shook my hand, and in broken English said “thank you.” In these and similar experiences in the Marines, I gained a deep sense of meaning and gratitude that remain with me to this day.

As satisfying as my military career was, I still felt the pull of my childhood calling to be a lawyer. So, in 2010, I made the difficult decision to go from Captain in the Marine Corps to first-year law student waiting tables part-time. Frightening as it was, it turned out to be the best decision I ever made, but not only because I excelled academically. Law school was where I met the incredible woman who would later become my wife.

Good grades in law school enabled me to secure a number of jobs in one of the most competitive markets for entry-level lawyers in the country, New York City. In New York, I served for a time with the U.S. Department of Justice, clerked for federal judges in the Second Circuit Court of Appeals and the U.S. District Court for the Eastern District of New York, and practiced with several prominent international law firms. In private practice, I focused mainly on litigating large lawsuits on behalf of major financial institutions. While my career was advancing, my spare time was virtually non-existent, my stress level hovered consistently high, and I lacked any sense of the meaning I had so frequently experienced in the Marines. Things eventually came to a head when I became a father of twin daughters. I understood then that continuing with my legal career in New York was incompatible with being the father and husband I needed to be.

So after much soul searching and honest conversations, my wife and I decided to move our family (which now included our third child) to Charlotte. The question I struggled with, however, was how could I earn a living as an attorney in such a way that would provide me with some level of satisfaction? In searching for an answer, I realized that other than being a Marine Corps officer, nothing in my life has provided as much purpose and joy as starting and raising a family. So, I thought, what if I pursued a career that allowed me to use my legal skills to help other families? Could working with families rekindle a sense of meaning in my vocation?

Although I was not entirely sure of the answer to those questions, I did know it was something I had to explore further. And so, after working for seven years as a litigator, I decided to focus an area of law that would increase my opportunities to interact with families on a regular basis—estate planning. After working in estate planning for only a short while, I knew I had made the right decision. On top of that, when I met Zachary and learned about his philosophy of practicing law, I knew that I had found the right law firm in Providence Wills and Trusts.

Make Sure Your Kids Never Spend One Minute in the Arms of Strangers, CPS, or the Foster System.

What happens when you’re gone?

Find out Why Estate Planning is Never "Basic" or "Simple"

Seven Questions to ask when choosing an estate planning attorney

Learn how to choose an attorney that will give your family the protection they deserve.

They seem obvious once you know, yet almost all parents' estate plans contain these mistakes.

Estate Planning - It’s all about your Family

What would happen to your family if something happened to you tomorrow?

Sign up for free, and get the latest updates straight to your inbox.